Today hails the dawn of Ozzy Wizzpop. My first ever magic show for children. Six months in preparation for Harry’s 4th birthday party. The much anticipated day failed to begin with a magical bang. The roads were laced with thick ice from the freezing temperatures we had – just my luck. Living at the bottom of the hill posed a big stinking cold slippy problem. The car is crammed with my props all ready to go. The nerves are kicking in and I start to feel the tension as I set off in these terrible conditions. I crawl halfway up the hill get stuck, go back down, try again and get stuck once again. This happens a further 3 more times. I shake my head in disbelief, I’m not going to make it. There will be no childrens entertainer in Portsmouth at this rate! I keep on trying and eventually the wheels somehow mange to stick to the road and I’m up and way.

Anchorage Lodge in Portsmouth is the venue where it would all begin for me. The children filed in looking calm and relaxed, a stark contrast to the gripping fear scuttling around my stomach at the time. It had been 26 years since I attended a 5th birthday party so was unsure how these little guys rolled these days. Tape players, Global Hypercolour T shirts and Club biscuits seem to have gone out of fashion. 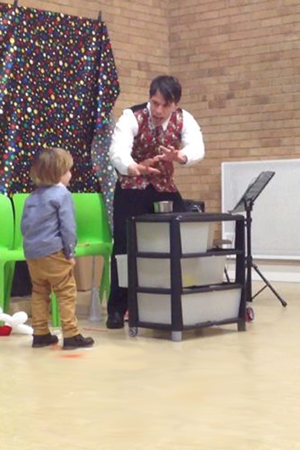 Trendy attired kids with boutique cupcakes and impeccably wrapped gifts ornate the room. I flash back to the magician Uncle Peter from the Chichester holiday park I used to watch every week as a kid, I was that Uncle Peter now. This is flipping mental. I imagine how wonderful it would be to be everlasting in these childrens memories as Uncle Peter was to me. However I may well bungle this up in my typical Frank Spencer-esq fashion so very natured to me. The kids are really close to the front, I know I’m gonna stand on one. I do my utmost best to not stand on a small child. Do not tred on the children Christopher.

The show got of too a bang. My warm up has the kids laughing and my first trick (the talking drawing) was a jaw dropper, and for the parents too. The beads of sweat per minute reduce. The show is striding along ever so well. A toddler wonders up on the stage like a jolly drunk Brit on a stag do, heading straight to my props. This isn’t in the script, what do I do? The little one is suddenly whisked away by a parent. Close call, back to the theatrical delights. I feel really hot, I’m still nervous but I march on. A little boy looks like he’s going to wee himself, oh no I’ve read about this happening. Thankfully he scurries off and attends to his impeding need.

I’ve survived the first half and no child has cried, booed, been left with a size 10 boot mark on or left the party. I can only assume I am doing a sufficient job. The kids fill up on sugar ready for round two. I pause for a moment of reflection as I sip my Evian. Things seem to be going well, and I’m ready to face the second half with a newfound sense of confidence and showmanship. I think the kids like me too, bonus.

I kick the second half off with a bang with the appearance of Bonkers my monkey puppet. Im unsure how the kids will embrace him . Will this be some crazy man with a puppet on his hand? My pessimistic view rapidly alters as I pull him out of my bag as the kids go wild for him. Bonkers first fan rushes the stage and dashes for him. He’s been in the public eye for some ten seconds and he is already experiencing the perils of fandom. It’s beetle-mania all over again. The boy grabs his arm and I’m sure bonkers is wincing by now. I don’t want him to go on strike due to unethical working conditions. I owe Bonkers a whiskey after the show for the stress caused.

The show finishes and I breathe a big sigh of relief behind the stage screen my mums mate Deb sewed together for me. I feel like tweeting a Neil Armstrong stepping on the moon styled message, instead I keep my thoughts to myself. A few parents congratulate me on a great performance. This really meant a lot to me and I’m generally thrilled by their comments. I pack away my props that scatter the floor (I should probably throw them in a bag as I go – dumb ass) when a parent asks for my card and how much I charge. This is a massive confidence booster. It must mean I’m good! I feel absolutely brilliant. Now can I have some of those fancy cupcakes please? – oh and one for Bonkers, he’s had a terrible day at the office.