Back in 2012 I decided to create something exciting for children’s parties and invented my alter ego – Ozzy Wizzpop (just call me Chris when we meet). So began my journey into showmanship with a quest to seek out the secrets of magic, the finesse of puppetry and the skill of balloon modelling. An accomplished showman is all well but kids can be a tough crowd. The challenge here remained to forge my new found skills into a thrilling engaging performance. After a few trial shows I quickly learned what worked and what didn’t and became ready to throw my hat in the ring of children’s entertainment.

I studied my trade from the greats of the industry. I seeked out every text I could dealing with the enigma of children’s entertainment. Some of these ultra rare books arrived from across seas, dating back as far as thirty years yet still so relevant today. I soon began to learn of the psychology of children, specific appealing comedic elements and how to tailor showmanship for children. I was still very aware that my real education would come from the trenches, gaining experience from continuous performances. If the children think your naff, they will in no uncertain terms will tell you so. Fortunately from early on any signs of heckling did not feature (phew – no one wants a five year old telling you that your ‘poo’).

My first show went very well. Armed with my newfound knowledge of such principles as ‘interactions per minute’ and ‘magician in trouble ‘, I felt ready to tackle the daunting task of keeping 5 year olds entertained for 2 hours. Interactions per minute is whereby I have a positive response from the child. This could be a laugh, a gasp, shouting something out or other uplifting involvement with show. I script the performance to include a set minimum amount of these per minute to keep the children immersed. The magician in trouble principle steers the performance into a nature whereby I get things wrong, the joke is on me and the kids are empowered by having one up on the performer. It works so very well. 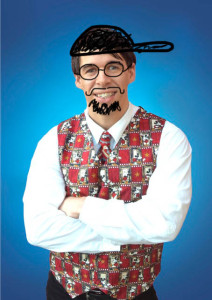 After a few months I realised I must be getting it right as the word of mouth bookings snowed in. ‘Am I the one with bonkers the monkey?’, is a question I’m sometimes asked by the parents on the phone. It seems Bonkers the monkey has surpassed me as the star of the show.

As the years have passed on I’ve continuously developed the show to make it more funny, more amazing and more memorable. If I find something that’s funnier then it goes straight in the show replacing something less funny. It’s this approach of always striving to make the show that little bit better all the time that has made me so popular with parents.